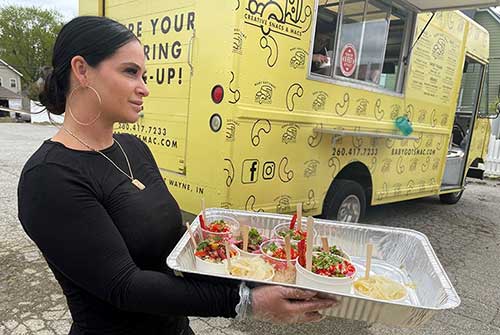 Autumn Law hand delivers a larger order from her mac and cheese truck during a stop in Garrett, Indiana.

There’s something a little cheesy about Autumn Law. If you smile when someone says mac and cheese, you must try one of her cheddary concoctions. This 35-year-old mother, wife, and businesswoman is sharp, and she’s darn gouda at what she does. Her mac and cheese food truck called Baby Got S’MAC has received rave reviews from the local media and from the public on social media. It is one of four food trucks she operates in the Fort Wayne area.

“I had an idea that I wanted to get food trucks going. My family owns a restaurant in Fort Wayne. They’ve been in business for about 35 years. I know what goes into the restaurant business. I have a passion for it. I love it.”

The family restaurant is Ziffle’s Rib Bar, located in Fort Wayne’s Georgetown Square. Autumn’s parents started it in 1987, and it has become one of Fort Wayne’s best-known rib joints. Autumn learned what it takes to run a successful food service while working there. That experience led her down the road to a food truck business.

“I bought my first food truck in 2017. After the first year, it was so busy and so crazy my husband said, ‘you need another food truck.’ I was like, this is crazy, how are we going to do another? He looked at the trucks we had, and he decided he could build one. So, he built another truck. They were all crazy busy, completely booked up, so we decided to do another and that’s when Baby Got S’MAC came along.”

One day, while doing business in downtown Fort Wayne, Autumn needed some more change for her customers, and that’s when she became involved with 1st Source Bank. She saw one of the banking centers nearby and decided to go there to ask for change. She needed smaller bills and some coins. At the time she didn’t have an account with 1st Source, but they worked it out. Autumn received the change she needed, and later opened an account, which she says opened the door to more opportunities.

“I was banking with another institution and everything was like jumping though hoops to get anything done. When I met Cynthia (Hale) over at 1st Source everything changed. Everyone there just went above and beyond to help me get everything done.”

Autumn says 1st Source helped her with many business decisions, and also helped her secure a loan from the Paycheck Protection Program (PPP) when she was getting nowhere with her previous bank. The PPP was established by the government to provide forgivable loans for businesses during the pandemic.

“They just walked me through all the steps and the paperwork. They made it happen and they made it easy. I am so thankful I got involved with them.”

The COVID-19 pandemic destroyed many businesses, especially restaurants and others in the food service industry. Autumn’s food truck business not only survived, it thrived. She fed people for free during the pandemic, creating good will and word of mouth advertising. She also stepped up and helped truckers. They couldn’t get into their normal stops as they drove along the highways, so Autumn took her food trucks to those stops and filled the need.

“The Department of Transportation contacted us, and it was a no-brainer. We have a mobile restaurant and we can take it to them. We were like, of course we’ll be able to do that.”

The effort grabbed the attention of the Fort Wayne media. She didn’t do it for that attention, but it certainly didn’t hurt business. Autumn believes that giving back to the community is an important part of a successful business plan. In the five years since it started, the business has grown from one truck to four trucks, it has survived the pandemic, and it appears to be trucking along toward more success.